On the current status of the Siberian crane (Leucogeranus leucogeranus)

Being the third rarest species of cranes in the world, the Siberian crane is included in the IUCN Red List of Threatened Animals as a critically endangered species.
The species is included in the Red Data Books of the USSR, the Russian Federation, the Sakha Republic (Yakutia), CITES Appendix (1a) and other national and regional lists of rare animals; protected under the Ramsar and Bonn Conventions.
The Siberian crane nests only on the territory of Russia, forming two scattered popula-tions: the almost disappeared West Siberian one (Ob), inhabiting the marsh areas of the northern taiga larch forests of Tyumen Oblast and wintering in Iran, the East Siberian one (Yakut), rela-tively prosperous, inhabiting the typical lowlands tundra between the Yana and Kolyma Rivers in the northeast of Yakutia and migrating to winter in southeastern China. While the number of Si-berian cranes in Western Siberia hardly exceeds 20 birds, northeastern Yakutia welcomes about 3,500 individuals for nesting. 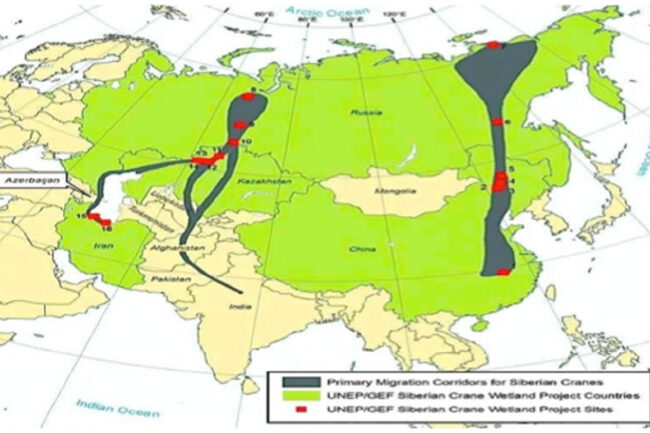 Fig. 1. The maps of western, central and eastern migration routes of the Siberian crane.

Currently, the Yakut population nesting area lies in the subarctic tundra of the Yana and Kolyma interfluve eat and west of the Indigirka River between 69-70 parallel north. 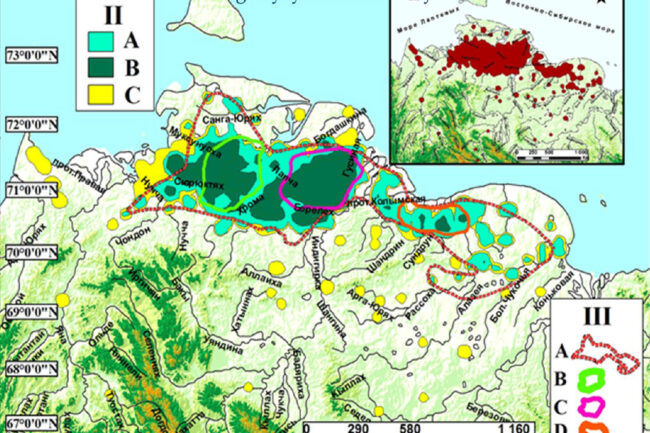 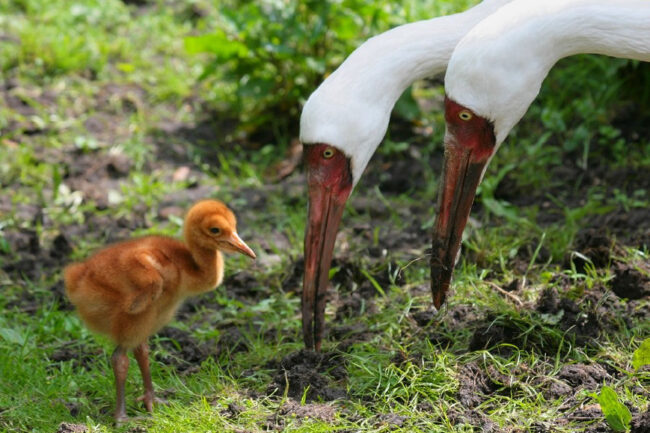 Photo by Rob Belterman. A Siberian crane chick with its parents.

Siberian cranes prefer to nest on sedge-cottongrass bogs in the lakeside lowlands and in-terlake depressions, where they find the most optimal feeding and nest-friendly conditions. Birds avoid dry hummocky elevations with the moss-lichen and dwarf birch cover. The most character-istic nesting habitats are vast (about 5 km2) shallow lakeside depressions, sometimes with a well-pronounced polygonal structure, overgrown with low sparse sedge and cotton grass. The water depth in such lowlands does not exceed 25-50 cm. 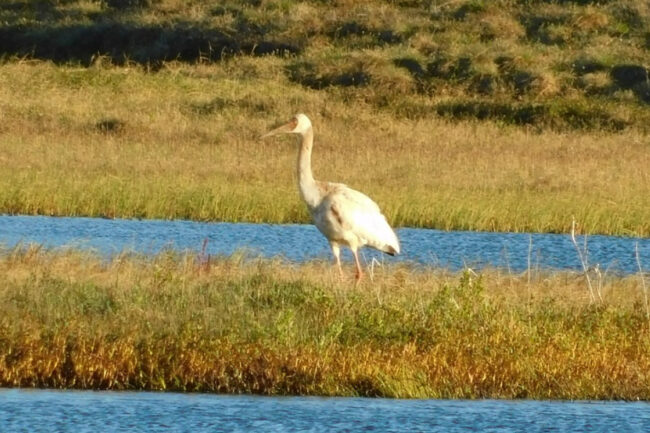 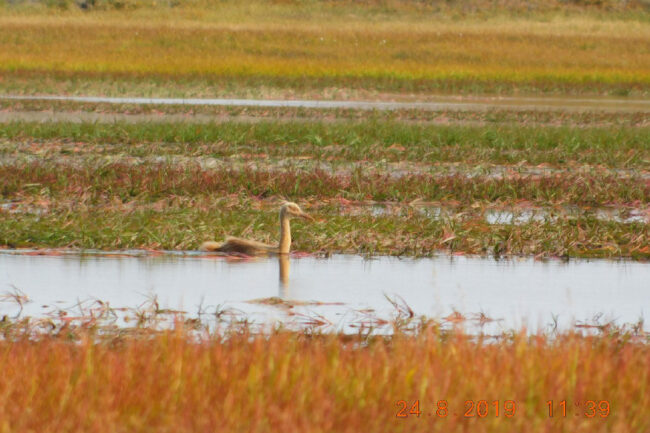 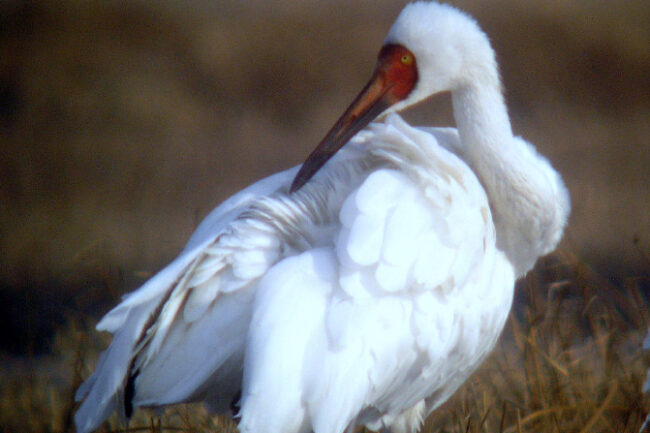 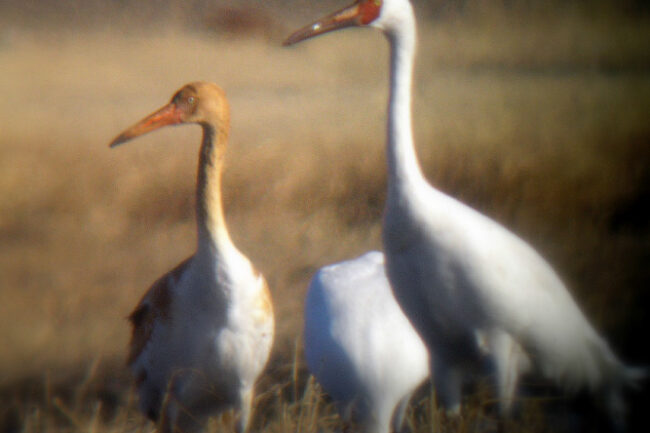 Photo by Inga Bysyskatova-Harmey. A pair of Siberian cranes with a chick. 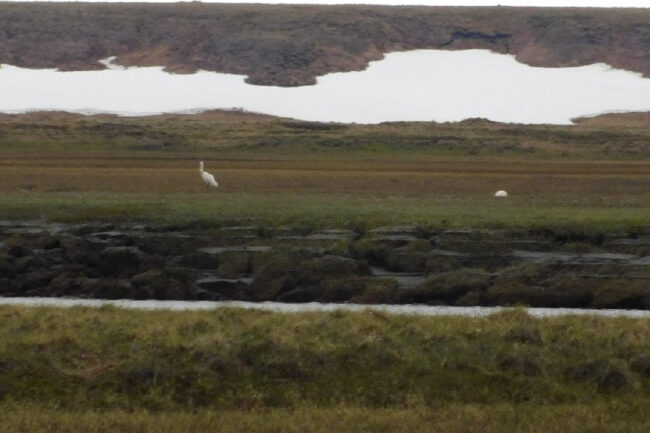 Photo by Inga Bysyskatova-Harmey. A pair of Siberians crane near the Sundrun River, Allaikhovsky District. 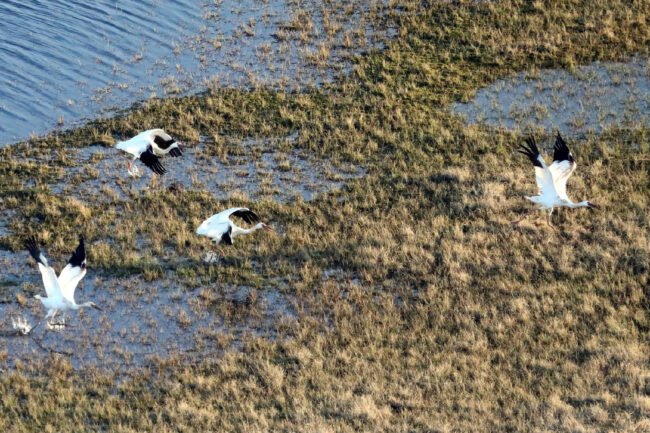 Photo by S.B. Rosenfeld. A group of Siberian cranes in the tundra, Allaikhovsky District.

In summer, some non-breeding young Siberian cranes are found in the regions adjacent to Yakutia, mainly in the Trans-Baikal Territory. Outside of Russia, the largest number of non-breeding Siberian cranes of the eastern population are seen in boggy lowlands of the forest and forest-steppe zones of Mongolia in sum-mer. 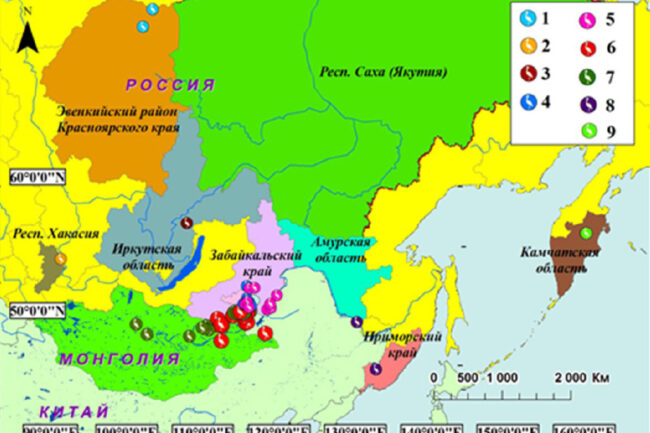 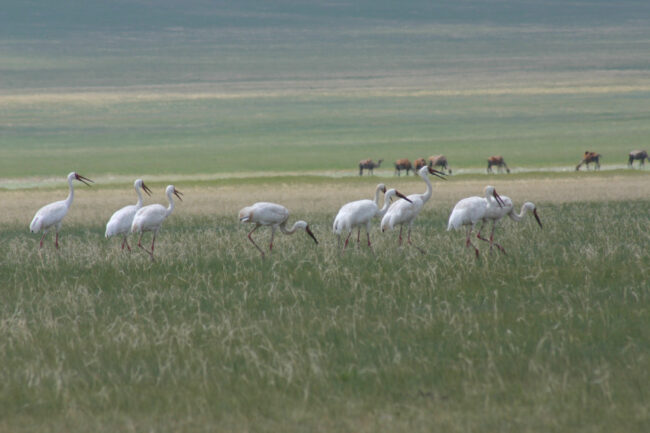 With the total migration length of about 6,500 km, the migration period of the Siberian crane in Yakutia last for over a month.
In northeastern China, the transit stops of the Siberian crane are much longer, and the concentrations of birds are more numerous than in Russia. To a certain extent, this is due to the intensive use and reclaiming of wetlands and, thus, the disappearance of usual habitats suitable for resting of migrating cranes. As a result, birds fly non-stop over longer distances and rest long-er in every available location. 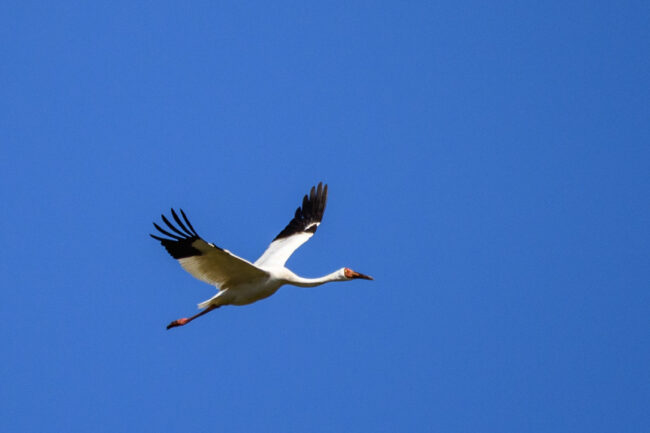 Photo by I.A. Ayanitov. A Siberian crane during the spring migration near the village of Maya, central Yakutia. 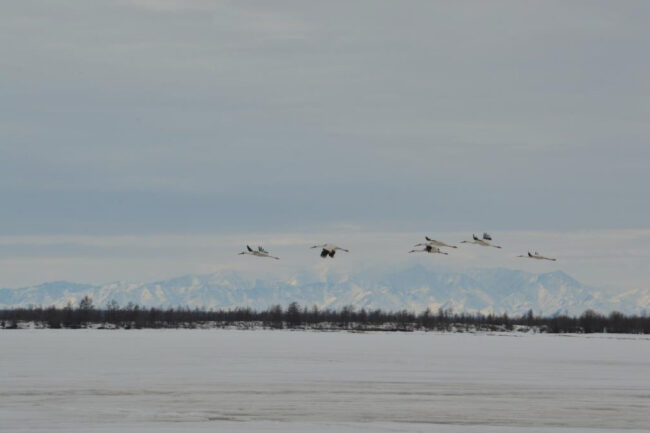 During the migration period, the Siberian crane is found in many areas of eastern Yakutia, and recently – more and more often in the western part of the region – east of the Lena River.
The main spring-autumn migration routes of the cranes run in the east of the region. They usually follow the valleys of big rivers – Yana, Indigirka, Alazeya and Kolyma (before the sharp turn of the river to the east, 650 N). The migration of Siberian cranes in Yakutia takes place in a narrow corridor, being most intensive in the Middle Aldan valley. At some observation points here, they visually register up to 5.5% of the entire population in spring, and up to 60% in autumn.
Outside Yakutia, Siberian cranes have been seen on migration in the southern part of the Amur region, in the Zeya basin and in Primorye (Lake Khanka). 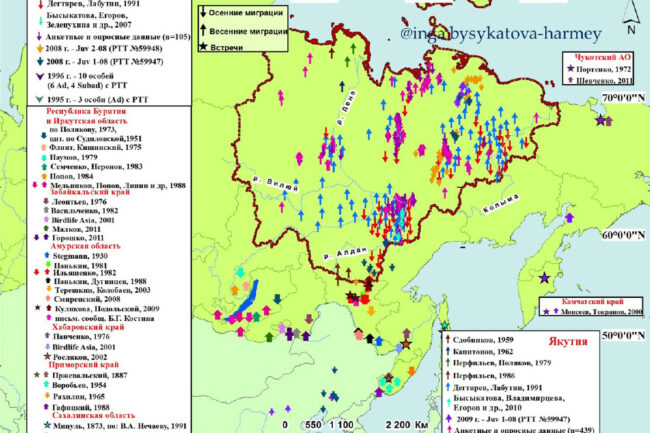 Fig. 5. Encounters with Siberian cranes during migration on the territory of Yakutia, adja-cent Russian regions and northeastern China (according to our own observations, literature and questionnaire information, data of satellite tracking of 15 Siberian cranes (9 ad, 4 sad and 2 juv).
The satellite tracking of autumn migrations of adults (10 ad + 6 sad) Siberian crane indi-viduals in 1995-1996 identified 8 main places of their short-term and long-term stops in Yakutia and adjacent regions (Fig. 5, A), and in China (Qiqihar Baicheng, Amannykan, Shuangtaizi River Delta, Yellow River Delta) (Fig. 5, B). 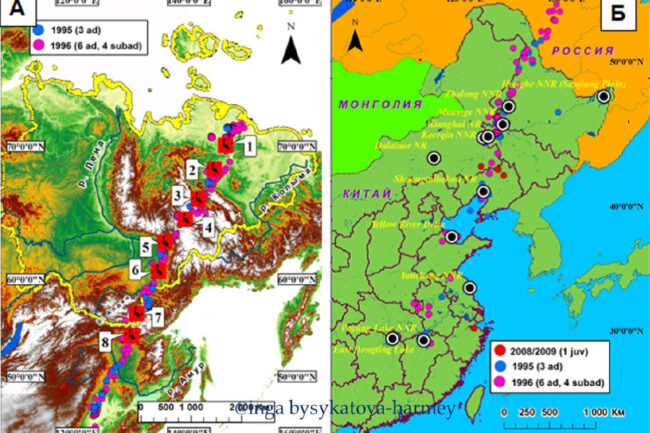 Fig. 6. А – The main territories for the conservation of the Siberian crane along the migra-tion routes:

1 – a section of the Indigirka River wide valley with the right bank of the lower section of its tributary Allaikha, northeast of the village of Olenegorsk (Allaikhovsky District);
2 – lake systems in the lower reaches of the Uyandina, Druzhina and Kubergane Rivers in the left-bank part of the Indigirka River (Allaikhovsky and Abyisky Districts);
3 – foothills of the Chersky Ridge (south of Abyi Lowland): basins of the Kurannykh, Kholbo-lokh, Berelekh Rivers (Momsky District);
4 – Elga Plateau – the basin of the upper reaches of the Elga River: the westernmost point of Lake Deligny, in the east – the left bank of the Utachan River (border of Tomponsky and Oymyakonsky Districts);
5 – foothills of the Verkhoyansk Ridge: the Khandyga River in the west, the Tompo River in the east (Tomponsky District); 6 – basin of the middle reaches of the Aldan River (Tattinsky, Churapchinsky, Amginsky, and Ust-Maisky Districts); 7 – the valley of the middle reaches of the Algoma River (Neryungrinsky District);
8 – the Zeya water reservoir (Amur Oblast).
Б. The network of protected areas along the migration routes of the Siberian crane in Chi-na.
The main wintering area of the population (99%), which has been known since 1980, is lo-cated in the lake system of the Poyang Nature Reserve in the basin of the middle reaches of the Changjiang (Yangtze) River in southeastern China (29°N and 116°E); small groups of the popula-tion winter on Lake Dongting, Hunan Province. The wintering period lasts from mid-November to mid- March. From April to July, a significant part of the reserve and its environs is flooded and the winter network of lakes is represented by Lake Poyang, only, with the depth reaching 21 me-ters and the area of 4 thousand square kilometers. In winter, the water level in the lake drops, forming a large number of smaller lakes and ponds, wet meadows, and sandbanks. By the mid-winter, 9 main lakes remain in the reserve, the largest of them being Taiza Hu, Dahu Chi and Bang Hu. Under 100 individuals spend the winter at Lake Dong Ting in Hunan Province. Per-haps, there are other wintering sites that are currently unknown. 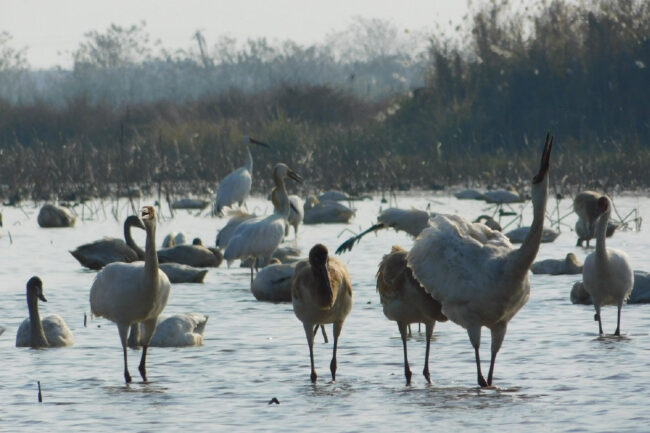 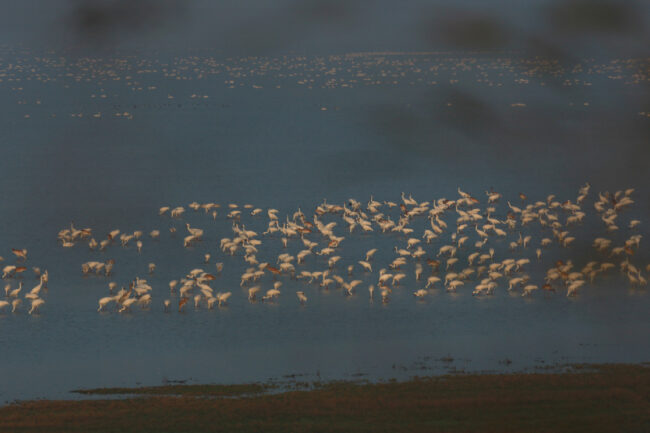 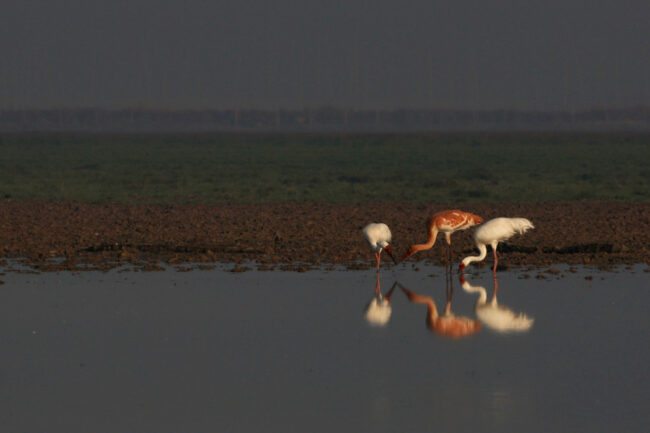